Part strategy, part shooter, and undeniably stylish, SUPERHOT is the bestselling independent FPS (First-person Shooter) in which time moves only when you move.

Note: This product is a GERMAN EDITION OF THE GAME.

After its Steam, Xbox One and VR releases, SUPERHOT takes its unique game mechanics to the world of tabletop games. SUPERHOT THE CARD GAME was designed with love of the source material, and with meticulous attention to all the details that make SUPERHOT so amazing. The mechanics are based on a well-known and award-winning Print and Play game “Agent Decker”, also created by Manuel Correia.

An ultra-portable deck of just 75 cards will be all you need to transport yourself and your friends into the visually stunning, beautifully brutal world of SUPERHOT.

Hand-crafted, micro-deckbuilding mechanics will immerse you in the ever-changing, visceral, and iconic fight sequences of SUPERHOT. Every turn and every move is an intense snapshot of lethal combat frozen in motion. Your decisions and your execution dictate the pace of the game. Daredevil maneuvers and risk-taking can reward you greatly or exact harsh punishment.
Every card you play advances the timeline. You shoot a guy’s head off. Enemies pour into the room. A shower of bullets fills the air. The clock is ticking. 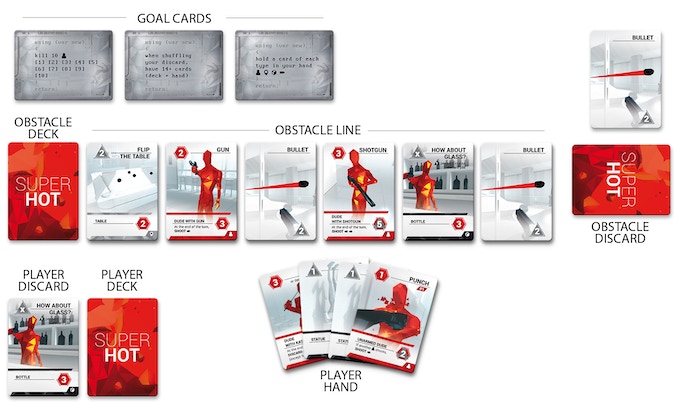 You can dive into SUPERHOT The Card Game in Single Player Mode the moment you open the box. It’s challenging, it’s dynamic and it’s rewarding. Scenarios chock-full of lethal puzzles and daredevil risk-taking will give your wits and focus a run for their money. The game will leave you exhilarated every time you prevail, completing a mercilessly difficult action sequence leaving you the last one standing.
Once you’re done, you’re ready to play other modes, to teach your friends, and to spread the system!
Compete with a friend, as one of you takes control of the game system, to influence the ultraviolent world of SUPERHOT. Will a whole new array of tricks be enough to overwhelm, outsmart and utterly dominate a human opponent?
If you’re not the competitive type, try joining forces in a two-player cooperative mode. You’ll have to work together every step of the way, as one poor decision could spell the end for your campaign.
Do you have one more to join in? Then play a three-player mixed-mode, and feel the deep, dark satisfaction of dominating two opponents at the same time. Three’s a crowd? Destroy them both, or work hand in hand with a mate to take down that sociopathic friend of yours, who would dedicate their time and focus to one thing only: to see you both crash and burn.

Note: This product is a GERMAN EDITION OF THE GAME.