We are back twith Season 2 of our Print and Play B&D access!

We are back with Season 2 of our Print and Play B&D access!

For only €10, you gain access to six games delivered in print-and-play format once per month! This means digital files ready to print at home. (You can read about the games below the Q&A!) Check out our calendar!

But what games will be included in Season 2?

For this season we have prepared some of our BIG GAMES, so joining S2 will be even more exciting and rewarding. Just take a look on this list:

– In the name of Odin 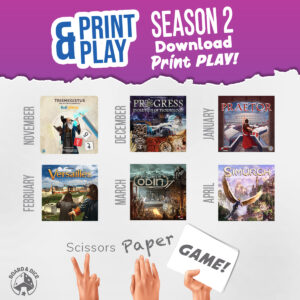 No, you pay only once to gain access to all our P&P games for the whole season.

Q: I don’t have Season 1 access, can I still join?

Yes, just go to our Season 1 access in our web store, and buy it.

Q: If I join in January do I get access to all games released in previous months?

Yes, you do. Once you join, you get access to all already released P&P games and all the future ones. It doesn’t matter when you decide to hop on board!

Every game we’re releasing this way will be prepared to be printed and cut out at home, using only paper and scissors. You won’t need any special equipment – a home printer will do just fine!

Progress: Evolution of Technologyis a card game about researching technologies. Each player takes his civilization from early antiquity and learns various technologies, moving progressively to the Middle Ages, the Industrial Revolution, and Modern Times and ending with today’s Internet or Social Welfare.
Read more on BGG!

Versailles: The palace and gardens of Versailles, finalized under the rule of Louis XIV of France, are an architectural marvel of the world. In Versailles, players take the roles of architects and interior designers, working together to build and decorate the ensemble of Versailles, competing for the favor of the King. Players take turns moving one worker from a building site to an adjacent one, activating all the workers in the new location.
Read more on BGG!

Simurgh is a game for 2-5 players who become heads of powerful clans in a fantastical world where humans and dragons live, hunt and go to wars together. As a head of a powerful family, each player will breed mighty dragons, make use of their special abilities, gather resources and try to make their house the most powerful by gathering the most Power Points. The game is played in a sequence of turns, with each turn allowing a player to perform 1 Main Action and any number of Free Actions. As a Main Action, a player will usually place a worker on an Action Space.
Read more on BGG!

In Praetor, you will take the role of a Roman engineer, and you will work together with the other players to build a magnificent city. You will manage your limited resources wisely and look for new ones, you will recruit new Workers while your old experienced ones will retire, you will build settlements to keep the population happy, and you will praise the Gods to earn their favor. Caesar will reward you if you give away precious resources to build Hadrian’s Wall, thus increasing your chances of becoming Praetor.
Read more on BGG! 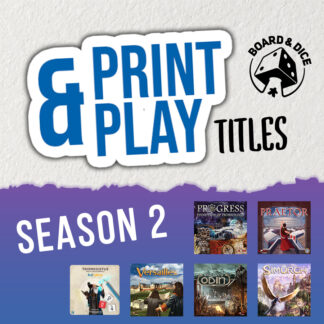