View cart “Print and Play Package SEASON2!” has been added to your cart.

We are well aware that staying at home for such a long time can be challenging and difficult, so we decided to prepare a bunch of awesome deals and huge Print&Play series which will keep you entertained for 6 months… or longer!

We are well aware that staying at home for such a long time can be challenging and difficult, so we decided to prepare a bunch of awesome deals and huge Print&Play series, which will keep you entertained for 6 months… or longer!

For only €10, you gain access to six games and two expansions delivered in print-and-play format once per month! This means digital files ready to print at home. (You can read about the games below the Q&A!) Check out our calendar!
Please note that Shadow of the Obelisk is a part of this package – as a May surprise.

Q: Do I need to pay €10 every month?
No, you pay only once to gain access to all our P&P games.
Q: If I join in September, do I get access to all games released in previous months?
Yes, you do. Once you join, you get access to all already released P&P games and any future ones. It doesn’t matter when you hop on board!
Q: What is Print&Play?
Every game we’re releasing this way will be prepared to be printed and cut out at home, using only paper and scissors. You won’t need any special equipment – the home printer will do just fine!
Each month you’ll get access to a new folder with A4 and letter-sized PDF files, which will contain all game components.
And of course, as we do not know when to stop, we still have some surprises planned for everyone who joins our Print&Play project!
Q: Do I have to buy Shadow of the Obelisk separately?
Not at all. Shadow is already included in this package as our May surprise!

Mistfall is a fully cooperative adventure game set in a fantasy world of mystery, eldritch powers, and high adventure.
A variable board setup, randomized encounters and enemies, a simple but robust monster AI, and multiple difficulty settings (starting from easy and ending with a true nightmare) make for a game that is a varied and challenging experience both solitaire, as well as with a group of up to three friends.
Read more on BGG!

Mistfall: Valskyrr expands Mistfall with a campaign system in different ways. Some of the features can also be used in the classic game variant.
Read more on BGG!

Shadowscape is a mini-dungeon crawl played on a modular board of rooms filled with monsters, treasures, and traps. It takes place in the Mistfall universe, allowing players to once again take on the roles of iconic Heroes of both Mistfall and Heart of the Mists. Move, plot, and fight competitively, cooperatively or solitaire, in a fast and furious mini-dungeon crawler of epic proportions!
Read more on BGG!

Shadowscape: Deeper Dungeon makes the base game larger and more dangerous than ever before. Customize your heroes with a set of new skills and arm them with new gear as they step into the underworld Realm of Shadows. Face events ads recruit allies to help you once again emerge as the champion of Shadowscape!
Read more on BGG!

Mistfall. Chronicles of Frost is a deck-building adventure game set in Æstemyr, a dark fantasy universe rich in its own lore, shared by Mistfall, Heart of the Mists, and Shadowscape. The land of Valskyrr needs its heroes once again! Only those with true skill and resolve can brave the ever-changing icy paths and monstrosities spawned by the nefarious power of the Mists. Fell mighty enemies, explore and shape the land, embark on quests, write your own chronicle, and become a legend in a world of dark sorcery and peril. Will you answer the call to adventure?
Read more on BGG! 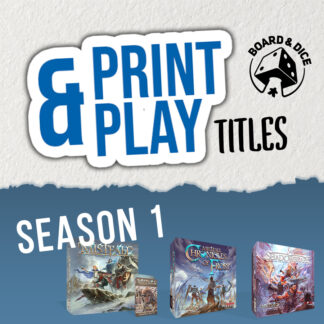