View cart “Print and Play: Mistfall Valskyrr” has been added to your cart.

Shadow of the Obelisk

This is a Print and Play game.  It’s prepared to be printed and cut out at home, using only paper and scissors. You won’t need any special equipment – the home printer will do just fine! After purchase you will get a link to the place from where you can download files.

IMPORTANT: If you already have access to our P&P package, you don’t need to buy this product – check the previously received Dropbox link. This game is waiting for you there as a surprise from us!

Every three weeks, up to Tekhenu: Obelisk of the Sun premiere, we will be releasing a new alternative game sheet with bonus spaces and twists for free!

Game description and mechanism:
Build one of the great obelisks of ancient Egypt. Aim higher and higher while remembering that what the shadow touches must never be disturbed!

Shadow of the Obelisk is a Tick-and-Write game in which you must employ the most helpful workers to build your obelisk and decorate it with a variety of beautifully carved symbols. Scribe scrolls to receive additional points and powerful bonus actions. Be careful, however! As your obelisk rises in height, the shadow it casts will begin to obscure the symbols on your wall, making them unavailable for you to use!

Each player is given a game sheet that contains a construction area for their obelisk, a wall filled with symbols, and three scrolls. In the middle of the table is a pool of three workers, represented by square tiles.

A player turn consists of two steps: Tick and Write.

Tick
The active player selects a single worker and rotates it one step clockwise.

This step is carried out simultaneously by all players.

You may freely rotate or mirror the shape before marking it on your game sheet.

There are three possible locations where you can use the shape, but you may only draw the shape once, choosing between:
• Building the Obelisk
• Carving Symbols
• Scribing a Scroll (if the shape is a square)

Carving Symbols
Draw the shape onto the wall covered with symbols. Copy the enclosed symbols (without rearranging them) onto a previously built portion of the obelisk.

Be careful, however! As your obelisk rises in height, the shadow it casts will begin to obscure the symbols on your wall, making them unavailable for you to use!

Scribing a Scroll
If the shape is a square, after drawing it onto the wall, instead of copying the symbols onto your obelisk, copy them onto one of three scrolls. On a future turn you can activate the scroll to perform a bonus action (allowing you an additional Tick-and-Write sequence, without the other players being able to benefit).

End of the Game
Once any player has reached the top level of the obelisk, the current round will be the final round of the game.

Scoring
For each column in your obelisk, score victory points based on having multiple identical symbols.

For each row in your obelisk, score victory points based on having multiple different symbols. 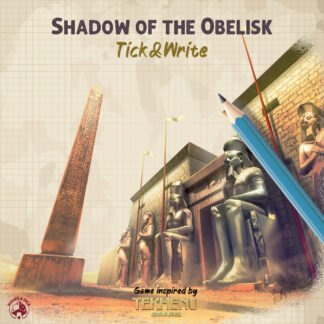 You're viewing: Shadow of the Obelisk €5,00
Add to cart